The bluest of blues and the scent of heaven. 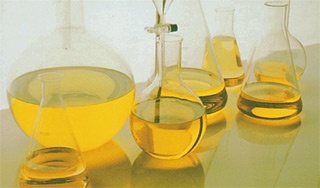 Eriocephalus punctulatus (Asteraceae) is a particularly fragrant, though rare, aromatic shrub endemic to remote mountain areas in South Africa. It is used traditionally for both medicinal purposes and the fumigation of dwellings during cultural rituals. A limited quantity of E. punctulatus oil was produced and marketed during the early 1970’s, and was enthusiastically accepted by the perfumery trade. Unfortunately it was found the wild crafted material failed to regenerate after severe defoliation, and the project was abandoned.

E. punctulatus is a bushy shrub which grows up to a metre in height. The simple needle-like leaves are long, narrow and gland dotted. The inflorescence is a small capitulum with purple disc florets and white ray florets. The fruiting heads extrude their involucre wool, hence its colloquial name; kapok bush.

E. punctulatus is found in the mountainous areas of the eastern Free State and Eastern Cape Province, South Africa.

Essential oil by steam distillation of stem and leaves. The oil is extracted from a cultivated selected clone.

DESCRIPTION OF THE OIL

The oil is distinctive for its striking deep blue colour. It has a fine fruity fragrance, with roman chamomile-like notes. The blue colour is due to the presence of azulenic compounds. Indeed it has been hailed as the fourth chamomile oil! Cape Chamomile oil has a very low taste threshold value and appears to have great potential as a fruity flavour enhancer. It has been suggested that the oil can be used as an alternative to roman chamomile, and experts have suggested it could add a whole new dimension to the flavour and fragrance industry.

Cape Chamomile oil has a very low taste threshold value and appears to have great potential as a flavour enhancer. It can be used in the same way as Roman chamomile.

Cape Chamomile can be used extensively in high-class perfumes.

Cape chamomile has excellent cosmetic properties which include its anti-inflammatory and soothing effects. Cape chamomile is presently being used in a range of cosmetics.

The leaves are used in baths for its relaxing and invigorating scent. Used in pillows, the scent encourages pleasant dreams. In some cultures the fumes of the burning fresh plant are used to disinfect the house and clear evil spirits after a death has occurred.

Mental and Emotional: To instil a positive sense of well being, helps to overcome depression. Used as an aid in combatting stress related ailments, thereby improving the quality of sleep. Particularly helpful for the over-stimulated mind, and over active emotions. Excellent at transition times e.g., childhood, adolescence and menopause.

Information from the USA claims that Cape Chamomile oil can assist in the treatment of depression. It also has potential for the treatment of stress related ailments, especially for improving sleep patterns. This is due to the presence of linalyl acetate which is the major component of lavender oil. The azulenic component of the oil would provide anti-inflammatory properties for skin ailments, as in German or blue chamomile.