Skimmelberg Fynbos Oils is a family owned company, rooted in the local community with extensive experience gained over generations in the production of fynbos oils including Buchu Leaf Oil, Cape Chamomile Oil, Cape May Oil and Cape Snowbush Oil.

As both growers and processors of our own produce, we can ensure highest standards in the entire production process, and as such take pride in the outstanding quality of our products.

Our Farms, part of a World Heritage Site:

Fynbos is the species-rich principal vegetation type of the Cape Floral Kingdom, which was declared a World Heritage Site by Unesco in 2004. Fynbos includes Rooibos and Buchu, both of which are endemic to the Cederberg region. Both occur naturally on our farms on the slopes of the Skimmelberg Mountain, named after the dapple-grey appearance of its rock-strewn peak.

Buchu has been harvested on our farms in the wild for the better part of a hundred years, originally in bags carried down the mountain on foot or by donkeys. Rooibos joined Buchu more recently as a crop, when it became popular early in the first half of the last century.

Today Buchu and Rooibos are cultivated rather than wild-harvested on our farms, in a sustainable way to ensure an adequate supply, and simultaneously protecting it from over-exploitation in the wild.

We subscribe to the aims of the GCBC, which it states as being essentially about people, the rural communities and landowners, and how they use the land to achieve a common purpose of sustainability, through appropriate conservation and management of the natural resources of this unique and diverse region. One of the principal goals of the GCBC is to restore and maintain connectivity across the landscape, through voluntary stewardship partnerships with landowners. In response, we have assigned more than 90% of the land of our farm Waterval to conservation, and as a result, after entering into a stewardship agreement with the public conservation body CapeNature, the Skimmelberg Nature Reserve was brought into being. 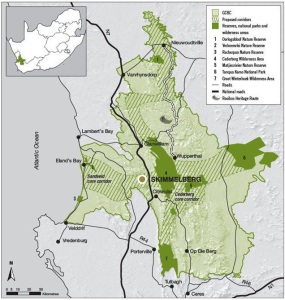 The RBI has been formed in response to the concerning rate of transformation of endangered habitat in the GCBC. The RBI aims to implement Biodiversity Best Practice Guidelines based on economic, social and environmental principles, within the rooibos industry in the region.

These Guidelines have recently been developed, and we are proud to be part of the pilot group of 25 farmers who are now implementing these in practice.

We have adopted environmentally friendly farming and production practices, working in harmony with nature by making use of its natural resources.

An example of such practices is the use of organic liquid fertilizer, known as compost tea, made on our farms in the process of vermicomposting; another is the use of carbon-neutral fuel in our essential oil distallation plant.

As a result we have gained certification of our organic products from CERES, an independent certification organization representing the highest international standards for nature-friendly products.

The Convention on Biological Diversity (CBD) is a global agreement addressing all aspects of biological diversity with three main objectives:

As a contracting party, South Africa has given effect to its obligations through its Biodiversity Act (Act 10 of 2004) and associated BABS Regulations (The Bioprospecting, Access and Benefit Sharing Regulations, 2008).

An integrated Export and Bioprospecting Permit issued in terms of the above regulations has been awarded to Skimmelberg Fynbos Oils (SFO) by the Department of Environmental Affairs of South Africa. (Permit No. IEP 0018).

SFO thereby complies with the objectives of the CBD, as such particularly relevant in the case of South Africa, as one of the most biodiverse countries on earth, with its wealth of biodiversity and associated traditional knowledge.